Movie Review: “In My Father’s House”

When Caitlyn and Charlie from PictureMotion people contacted me to do the review, I was very skeptical. I didn’t think I could really provide an open-minded review while harboring assumptions about the movie. My assumptions had nothing to do with the movie but everything to do with the consistent reminders of the black male existence in America. My dilemma is with our never-ending challenge to find success in any aspect of our lives, while at the same time, changing the dialogue from defeat and pity to prosperity in a system of systems that are poised against us.

“In order to break a cycle you have to deal with the pain of what ever trauma that you’ve been through.” Donnie Smith(Wife)

They sent me a screening link, and I figured if I can get through the hour and thirty-three minutes it might be something to discuss. 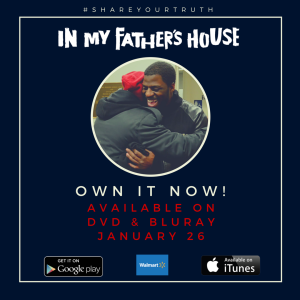 I set up to passively watch the movie while doing my ironing for the week. I put up my ironing board, iron is hot, movie starts, I pick up the iron…

I didn’t touch any of my shirts, I didn’t iron not one article of clothing. I immediately put the iron down, picked up a pen and started taking notes. I watched the movie twice.

The movie makes the immediate distinction of what it’s not about; Rhymefest’s career, his latest album, another rapper grasping for any glimpse of that first taste of fame. For the first twenty minutes, I could not look away. If I would have tried to iron a shirt I would have burned it. Through my own research I find that Che “Rhymefest” Smith won a GRAMMY award for co-writing “Jesus Walks” with Kanye West. He’s also won an Oscar for co-writing “Glory” with Common and John Legend. The movie is not about that at all, but this movie is definitely his best work.

“I started something that I can’t turn back.” Che Smith

This movie introduces the unspoken dynamics that exist at the core of the individual and most families. These issues are inherent barriers to a man understanding himself. Like Che, I had some unresolved issues in my past that needed to get addressed. I didn’t know my entire father’s side of the family until I was about 14 years old. I didn’t know why they never sought me out. When I met them, I learned and understood where most of my behavior and traits originated. It was like finding my dna, when I met them…I felt complete.

The movie embraced me on levels of masculinity that I didn’t expect. There were iconic images of fatherhood that made me appreciate the viewing; chess playing, the haircut, the dialogue.

The movie takes you through the painful cycle of homelessness. It pulls you into the emotional layers of single parenting, mentoring, juvenile issues, etc.   Every black child in America could benefit from watching this movie, but every person in America could reap an investment of compassion.

“I wish I was there more too.” Brian Tillman(Father)

Most documentaries are factually rigid and the camera presence introduces a sterile entity that bleaches the ambiance of the movie. Ricki Stern and Annie Sundberg direct this movie in a way that you’re not led and you don’t follow. You are in the conversation as a family member in the story. I’m intrigued by the other endeavors of Break Thru Films. Kudos to these two women! Ricki and Annie are on a whole different echelon of filming, you rock!

“The only thing I did good in my life was Che.”

IN MY FATHER’S HOUSE was nominated for an NAACP Image Award. Tune-in to TVOne on Feb. 5 to see if we won the award for Outstanding Documentary (Film)!

IN MY FATHER’S HOUSE will be available on DVD & BluRay tomorrow on January 26th. Please watch with the males in your family.

One response to “Movie Review: “In My Father’s House””

This site uses Akismet to reduce spam. Learn how your comment data is processed.